Eva Leitolf was born in Germany in 1966 and graduated from the California Institute of the Arts. Her work, amongst others, has been exhibited Pinakothek der Moderne in Munich, at the Rijksmuseum in Amsterdam and the Wallach Art Gallery in New York. She is also a regular speaker at art schools and international universities, in particular the Vevey School of Photography. Postcards from Europe 03/13, the first part of her research, was published in 2013 by Kehrer (Heidelberg). 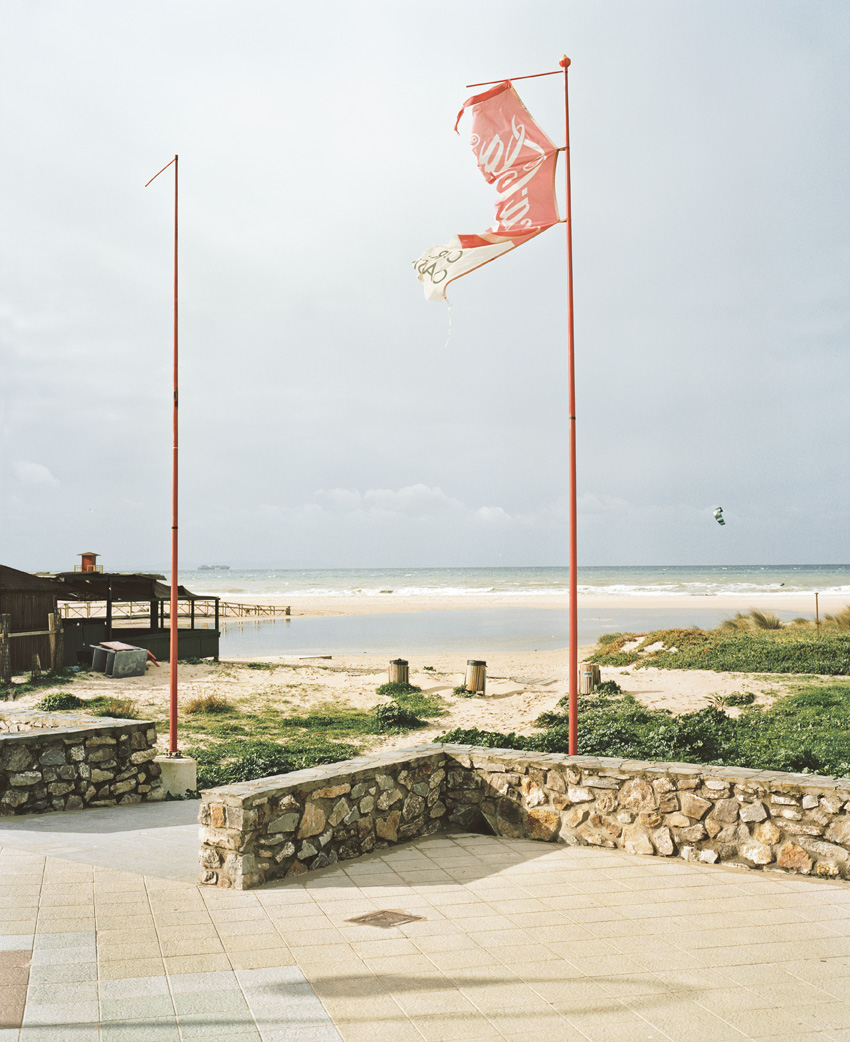 Playa de los Lances, Tarifa, Spain 2009 A boat carrying twenty-three undocumented Moroccan immigrants went down off Tarifa during a severe storm on 1 November 1988. The bodies of ten who drowned were washed up on the beach at Los Lances. Nine were never found and there were four survivors. A vessel with more than thirty people on board sank near Tarifa on 15 September 1997. Six passengers survived, fourteen corpses were found on the Playa de los Lances and an unknown number were lost at sea. El País, 2 November 1988 and 16 September 1997; Diario de León, 9 October 2002

POSTCARDS FROM EUROPE 03/15
Work from the ongoing archive

Eva Leitolf started her “Postcards from Europe” project in 2006, assembling photographs and texts touching on examples of conflict in the context of global migration. Leitolf’s interest in the way migrants and refugees are treated within the European Union and at its external borders – in Spain and its North African exclaves, southern Italy, Hungary, the Channel ports of Dover and Calais, as well as Germany and Austria – represents a radical departure from the style of reporting we have become accustomed to. Leitolf’s photographs show scenes where incidents of exclusion, xenophobia and violence have occurred – but empty of people and sometimes without any sign of human civilisation at all. Each of these “eventless” photographs is accompanied by a dry, detached text describing the events to which it refers. Only in the course of reading does it become appa­rent why the place was worth photographing at all.

Eva Leitolf’s artistic method thus subverts the idea that the medium of photography is universally comprehensible without any prior knowledge, which has existed since the origins of the medium. She challenges both the objectivity attributed to the medium and the belief that photography transports reliable information requiring no further knowledge about the context in which it was created. Furthermore, her approach questions the widely accepted rules and formalisations of media reporting on the concrete and currently omnipresent subject of the fate of refugees. Leitolf resolutely avoids the shock effect of portrayal of violence and instead pursues a photography that studiously ignores the media’s rulebook. Leitolf’s photographs acquire their significance precisely through their avoidance of moral pathos and instrumentalisation.

Exhaustive research goes into the texts accompanying the photographs, for which Leitolf draws on a wide range of sources: news reports and police files, discussions with migrants, victims, representatives of aid organisations and local people. The texts are formulated as pithy objective descriptions and serve – like the photographs – not to provoke shock and scandal at suffering and inhumanity in the context of war, flight and asylum, but to relate behaviours, structures and pro­cesses as cause and condition of the conflict in question.

In 2011, Eva Leitolf participated in the Vevey International Photography Award organised by the Festival Images.

This exhibition is supported by the Bavarian State Chancellery and the Federal Commission on Migration FCM. Courtesy Kehrer Berlin Galerie. 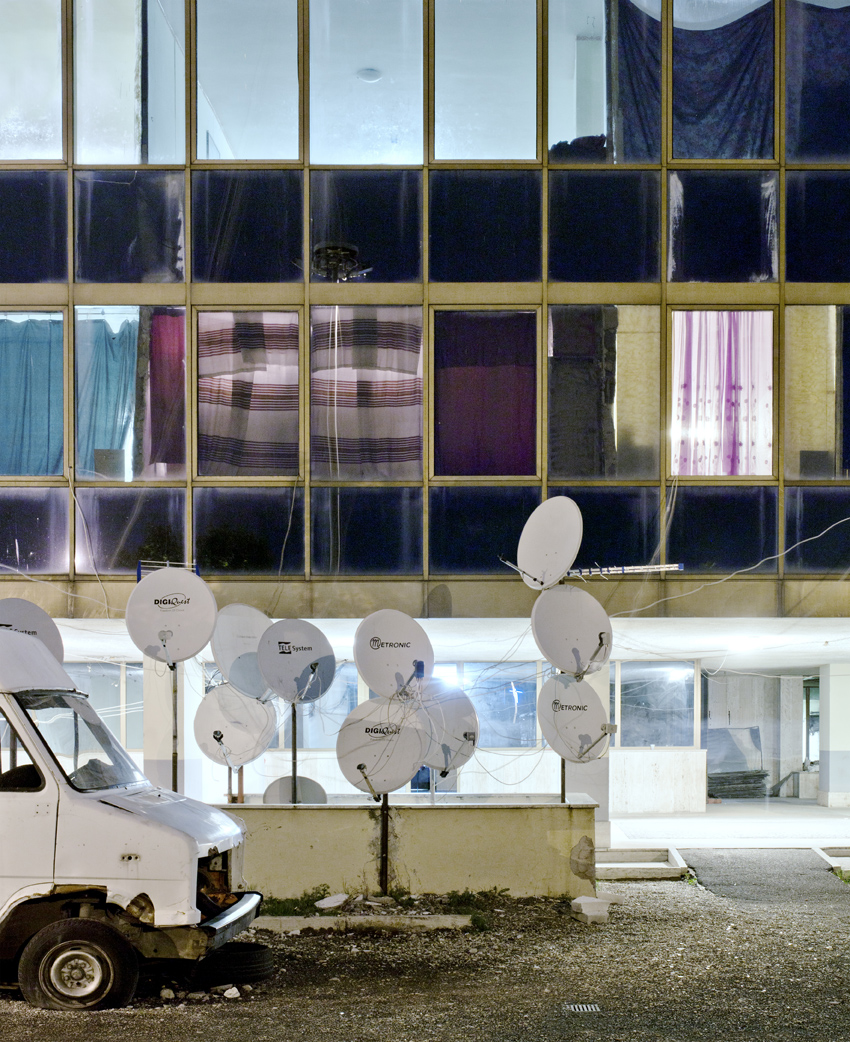 Palazzo Selam, Rome, Italy 2012 In November 2012 there were 835 mostly recognised asylum-seekers from Somalia, Eritrea, Ethiopia and Sudan living in the former university building. The occupation, which began in 2006, was tolerated by the city council. Volunteer medics from Cittadini del Mondo, who cared for the refugees, regularly diagnosed complaints attributable to inadequate hygienic facilities. According to Fondazione Integra/Azione, six thousand refugees in Rome needed housing, but the city provided only 2,200 places (out of 3,150 nationally). In Germany a lawyer representing a Somali asylum-seeker argued in 2011 that the Italian authorities were pursuing a deliberate strategy of impoverishment in order to force refugees to move to other EU member-states. And on 2 July 2012 the Stuttgart Administrative Court ruled that a Palestinian family should be permitted to seek asylum in Germany rather than being returned to Italy, because systematic deficits in the Italian asylum process meant they would face inhumane treatment there. While acknowledging problems, the German Federal Office for Migration and Refugees said it intended to abide by existing repatriation practices on the grounds that Italy possessed a functioning asylum process that satisfied the standards of the European Union. Pro Asyl, The Living Conditions of Refugees in Italy, February 2011; Süddeutsche Zeitung, 9 May 2011; Verwaltungsgericht Stuttgart, press release, 12 July 2012 (A 7 K 1877/12); Spiegel Online, 13 July 2012; New York Times, 26 December 2012; Cittadini del Mondo, 31 December 2012 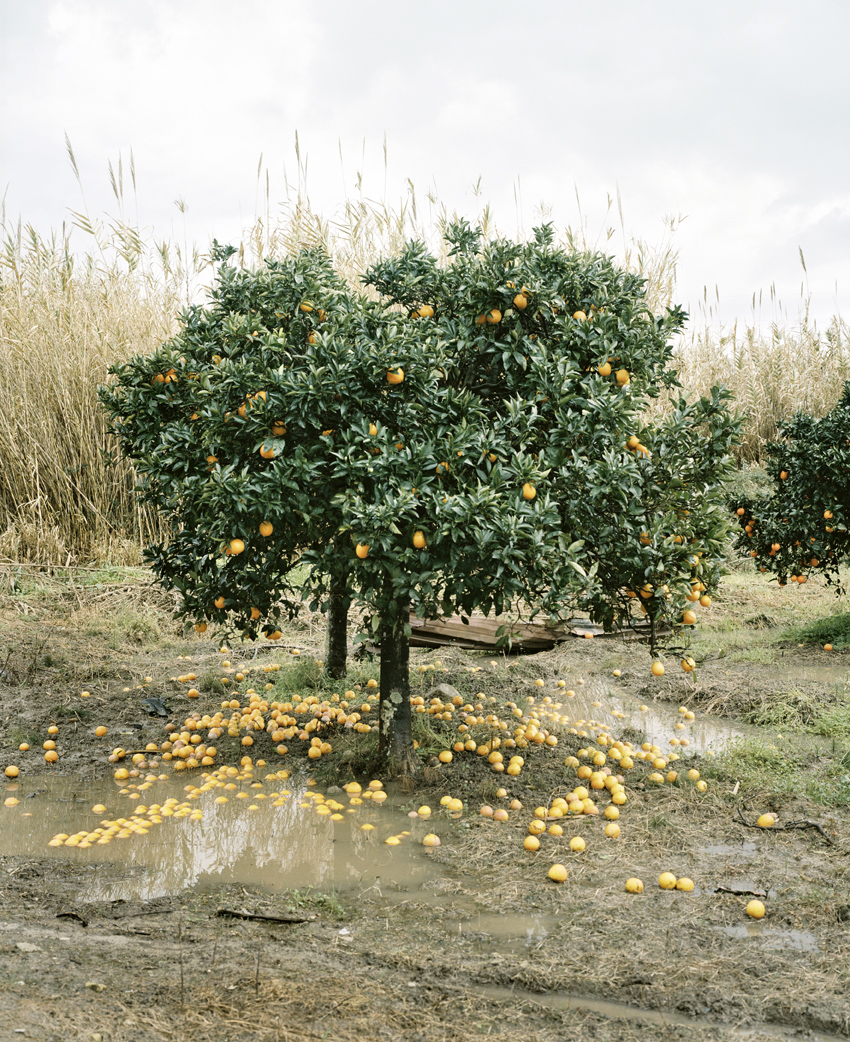 Orange Grove, Rosarno, Italy 2010 In January 2010 the price obtained by Calabrian citrus growers for their Moro and Navel oranges was five euro cents per kilogram. They paid their mostly illegally employed and undocumented African and Eastern European seasonal workers between €20 and €25 for a day’s work. Depending on the variety and the state of the trees a worker can pick between four and seven hundred kilograms of oranges in a day. The business was no longer profitable and many farmers left the fruit to rot. During the 2009–2010 harvest there were between four and five thousand migrants living in and around Rosarno, most of them in abandoned buildings or plastic shelters, without running water or toilets. On 7 January 2010 local youths fired an air-gun at African orange-pickers returning from work and injured two of them. The ensuing demonstration by migrant workers ended in severe clashes with parts of the local population, during which cars were set on fire and shop windows broken. Accommodation used by seasonal workers was burned and hundreds fled, fearing the local citizens or deportation by the authorities. On 9 January, under police protection from jeering onlookers, about eight hundred Africans were bussed out to emergency accommodation in Crotone and Bari. A Season in Hell: MSF Report on the Conditions of Migrants Employed in the Agricultural Sector in Southern Italy, January 2008; tagesschau.de, 10 January 2010; interviews with orange farmers and seasonal labourers, Rosarno, 27–29 January 2010